As more and more retailers no longer offer free single use plastic bags for carrying purchases, the result is a plethora of reusable bags being offered for sale. ( In my state, the government has legislated to ban the single use bags)
One example is the Boomerang bag which is made of cloth and mostly made by community minded groups and offered for sale at various outlets, including markets. The bags are very similar to the morsbags I saw in the U.K.when we were there in 2008. I'm thinking the name Boomerang reflects the fact that you can keep using these bags; as long as you remember to put them back in your car! Lol
It was decided in our parish that we would make Boomerang Bags for sale. Donations of fabric, including old curtains, sheets and doona covers were requested. So I took a hard look at my dressmaking fabrics and also my patchwork cottons and donated quite a bundle.
So then some pockets were screen printed... 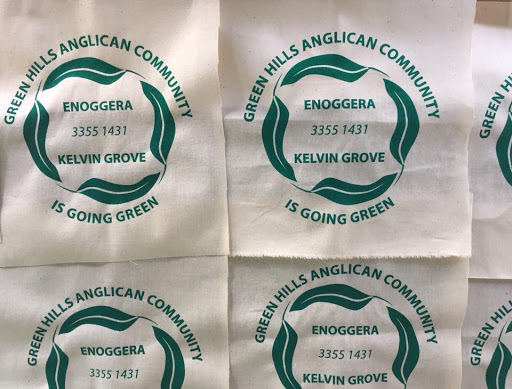 A prototype was sewn, ready for the first sewing bee... 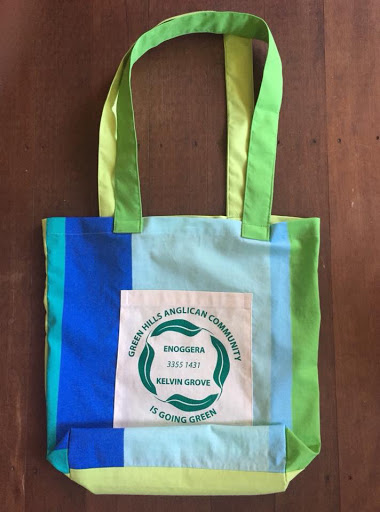 But progress was slow via the sewing bee method. I couldn't make it to the sewing session on that day and it was the same for others. So the organiser came up with the concept of 'outworkers' and the 'assembly line' concept. I put my hand up to help. I was given the task of sewing the handles. I was spoiled as the handles had been already cut out. So it was just a case of pressing, pinning and sewing.
I've done 2 lots so far...total of 39 handles. Maybe more to come. 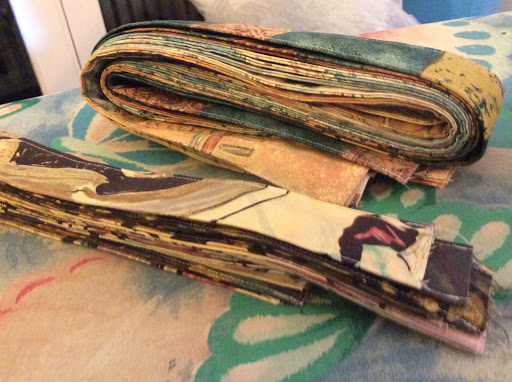 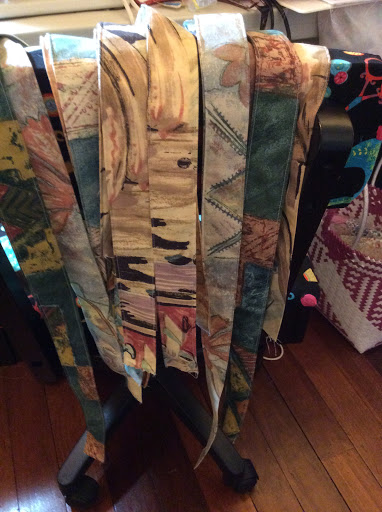 My favourite sewing machine, my vintage Elna 'work horse' needs a service ( the needle is going up and down when the bobbin is being refilled 😕) so I need to get that done next week in case I get some more handles to sew...or use the newish Janome?
Posted by Maria at 4:35 AM 6 comments:

The parish art show this year was more low key than ever before but as if by magic,  ( or was it divine intervention? 😉) the money raised was almost as much as raised in other years.
The organisers decided to feature the works of indigenous artists and much effort was put into finding such artists to invite them to exhibit.
Our parish priest opening the show. Father B is himself an aboriginal. 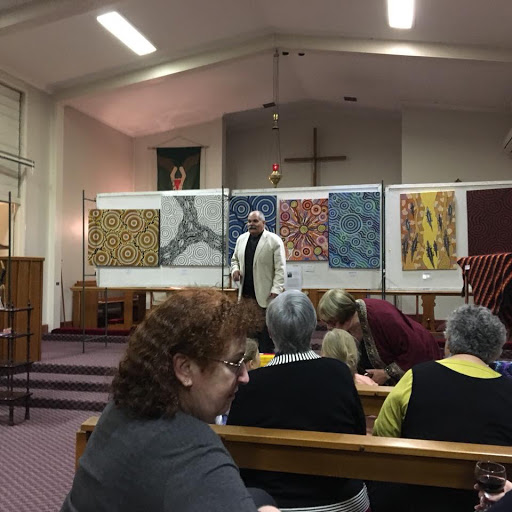 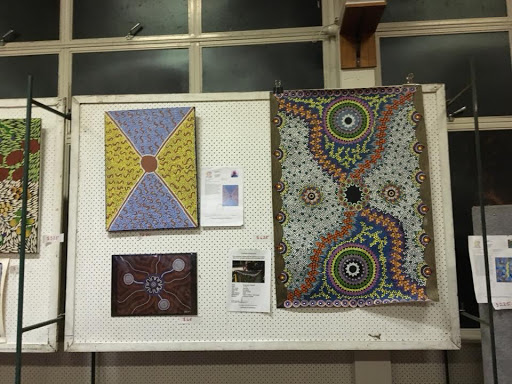 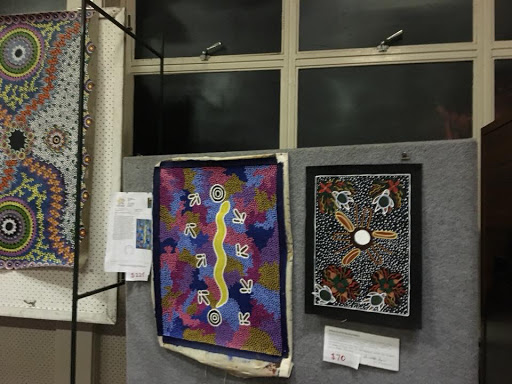 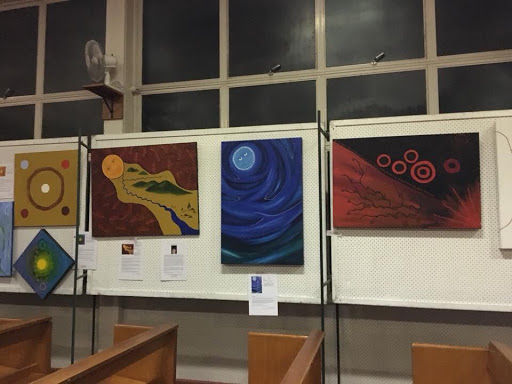 After the show when I checked my photos I realised I'd missed taking photos of some really large works...that were very traditional and eyecatching.
The next photo was an exhibit put in the show by the teenage granddaughter of our parish priest. These pieces were part of an assessment for her art studies at high school. They were eyecatching and attracted a lot of interest... 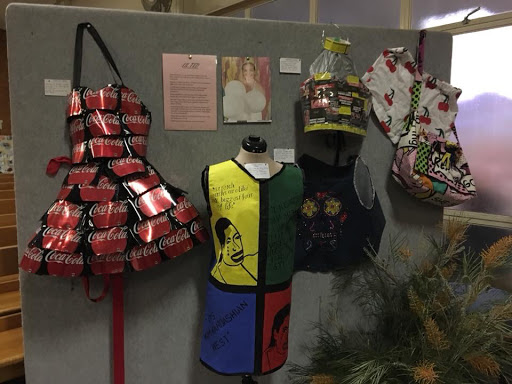 A close up of that dress made of Coca Cola cans... 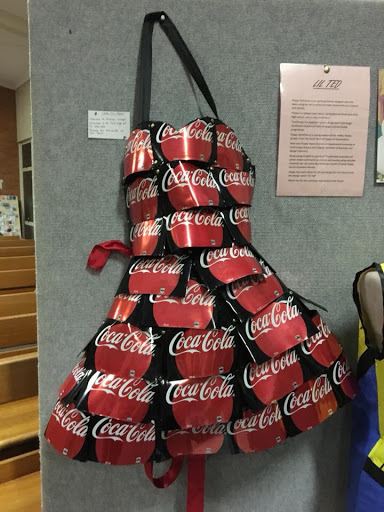 The young artist joked that it wouldn't be the most comfortable dress to wear! I agree! 😂
I knitted 2 throws to donate to the show...
The chevron garter stitch one sold on opening night. The buyer planned to use it as a wall hanging as she said that way her teenage children couldn't 'wreck it'. I didn't really mind that she wasn't going to drape it over her sofa and snuggle under it when the weather was chilly...the main thing was that it sold...which meant money in the parish 'kitty'! 😉 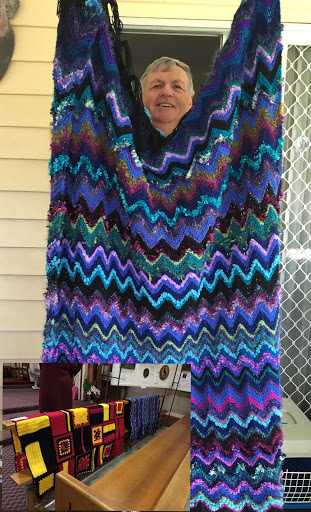 The inset photo in the previous photo shows both the chevron throw and also another indigenous throw that was not for sale. It just was on display as it had been made for K4BN.
The other donated throw... 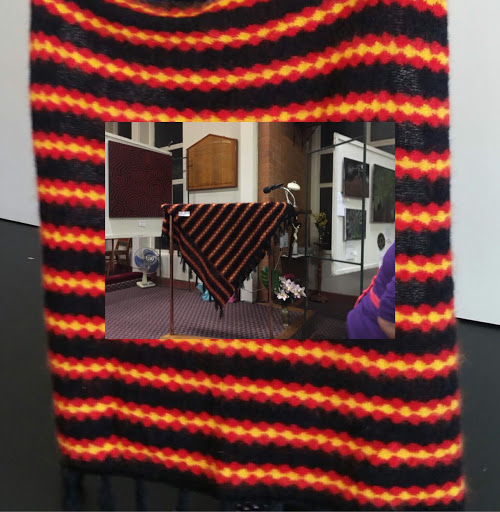 The mohair one in indigenous colours sold on the Saturday. An aboriginal elder woman bought it saying that she would auction it to raise funds. She was confident she could raise a fair amount that way. ( I did hear later though that she loved it so much she was thinking of keeping it)
This year the craft stall holders were in the hall. Other years they have been in the church and the paintings were in the hall. 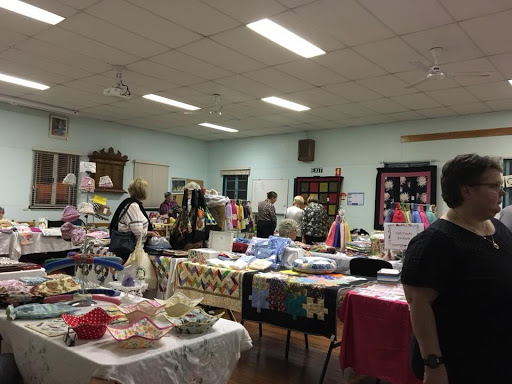 And I fell in love with a painting and ended up buying it. It was painted by a young indigenous artist who had entered 6 pieces of his work. There was a luminescence about the painting that I just loved! 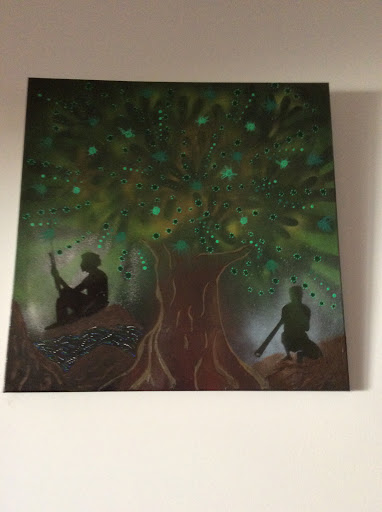 The artist described his painting as being 2 traditional young indigenous men sitting at night thinking of their plans for hunting the next day. DsD1 said it reminded her of the Lost Boys characters in Peter Pan. And I found that it reminded me of the Kindle icon on my iPad. Lol! Different interpretations to different people. 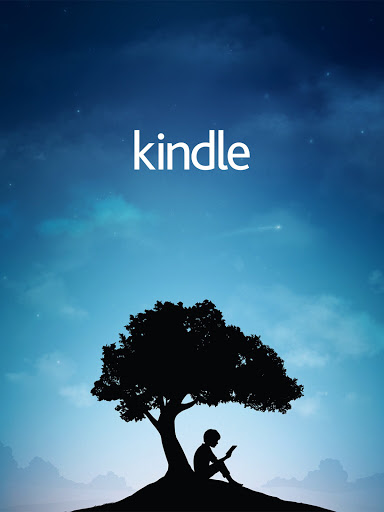 Confession time...I tend to procrastinate when it's time to start a new project. Especially this is so when it's a knitted throw and the thought of casting on 200 or so stitches and then those first few rows where the pattern is being set...I dither/put it off! Lol.
After the 'knitting marathon' to finish 2 throws for the Parish Art Show in late July, I decided to just focus on starting some projects ready for the future. No new patterns, just old favourites that I can just pick up and work on when I decide I want to make a gift/Raffle prize or whatever. So... 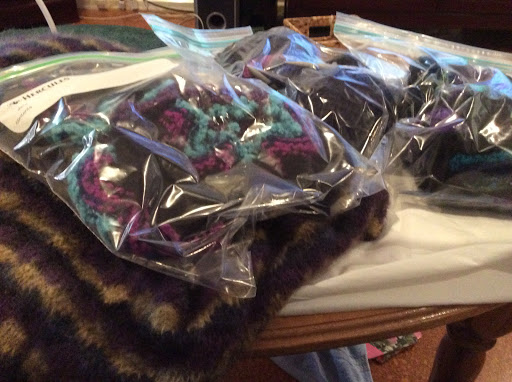 I started 4 throws and popped 3 into bags and I've continued working on the 4th one.
Another garter stitch chevron one... 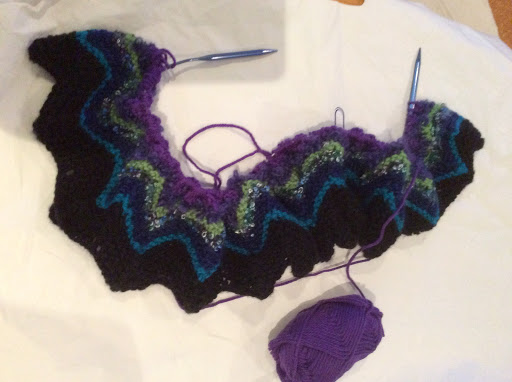 Yet another garter stitch chevron/ripple one! 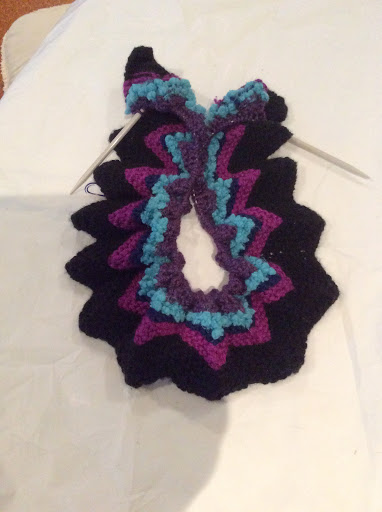 A honeycomb pattern throw using as the main colour some remnant navy blue yarn from the Bendigo Woollen Mill bought on a holiday to Victoria a few years ago...or maybe it was a lot of years ago! 😂 lol 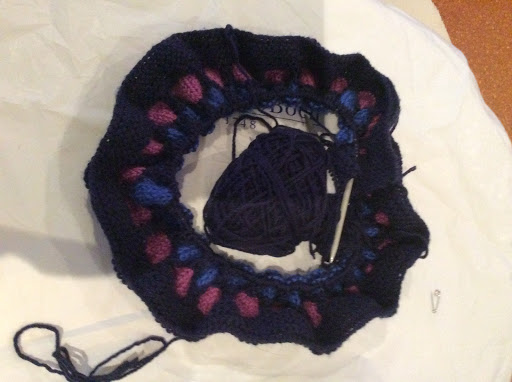 The other 'start' was a throw using a favourite slipstitch design and some gorgeous Jo Sharp yarn that I bought before I retired...I've been retired 7 years! I continued working on this as it is so light a project that it was perfect to take away last month when DH and I spent 6 days in Sydney. I think I have enough of this yarn to make another throw! Lol 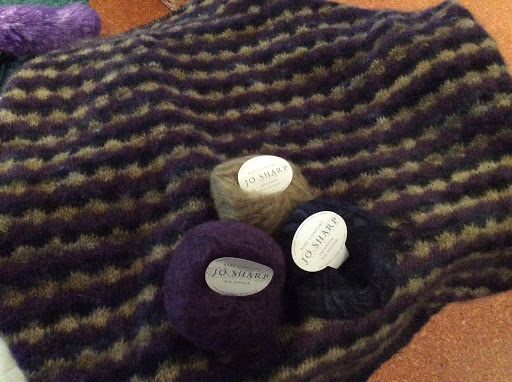 One more photo that is yarn related. I kept some of the knitted items that my girls wore as babies. The reality is that today's babies rarely (if at all) wear the styles of the 1980s so instead of a granddaughter wearing this particular little top that I knitted in 1984 for DD2, Gerald Bear ( or should that be Geraldine Bear? 😉) is now wearing it while the weather is cold. The little girls love it! 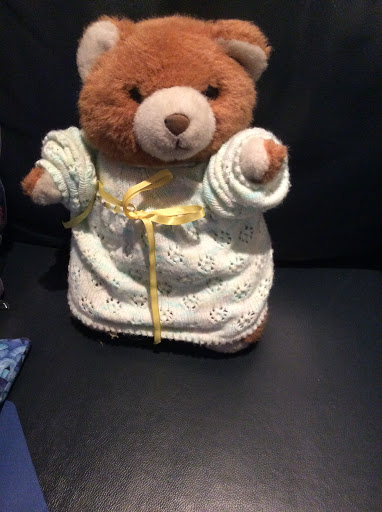 Joining with Janine from the Rainbow Hare Blog for Wool on Sunday.