A few days ago we headed further south to the central part of California. We were trying to establish which place would be the best to stay in order to get a tour to Yosemite. It was decided that we should make Stockton our destination but then we heard that there were problems due to the inclement weather at Yosemite; the road in was closed and tours were not taking bookings.


The trip from Redding took us through very flat country at first...360 degrees around the horizon of flat land! By the turn-off to a town called Corning, orchards of trees took over the landscape. Corning is known as the ‘Olive City’ but there were also farms of trees which didn’t look like olives to me! More like stone fruit or even apple trees perhaps? 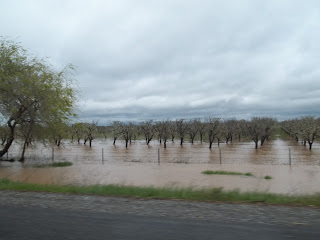 The weather as we drove along was quite windy and rainy; you could feel the car being buffeted by the winds as we continued on the highway! We saw more flooding; whole paddocks under water with just the fence posts peeping through. There are levees beside the highway so flooding must be something that has been regular in this part of California. By lunch time we’d had confirmation that the trip to Yosemite wouldn’t be going ahead.
We drove off the highway and into Sacramento to have a bit of a look. It is the capital of California and we drove around to find the capitol building...yes! it is also a mini version of the one in Washington DC! Lol. In the front grounds of the capitol building were lots of stalls/tents...it was apparently ‘Ag Day’ ??? (No where to park so we could check it out) 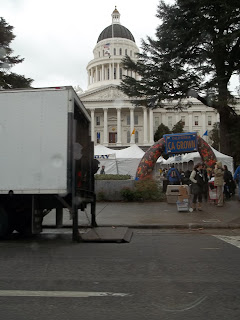 We then drove on to Stockton for our overnight stop. It is a big city, (13th in size in California) and has lots of industry. The weather was very windy there and later that night on the TV news we discovered that an area, near where we had driven on the highway, Colusa County, had been hit by a small tornado!
After our overnight stay in Stockton, we set off again, this time our destination was Monterey which is on the coast and south of San Francisco.  We took a ‘smaller’ road firstly for this journey and it was like driving on a country road in Australia. It was, however, pouring with rain and very cold all throughout our journey. We then had to join the larger highway as we turned west to drive towards Monterey. From this highway we noticed a large body of water which wasn’t floodwaters so we followed the signs and ended up at the Visitor Centre for the ‘California Aqueduct’ and the body of water we’d seen was the San Luis Reservoir which was formed by the O’Neill Dam. As well as water supply, this project is also used for flood mitigation purposes...hope it works better than Wivenhoe did in January! 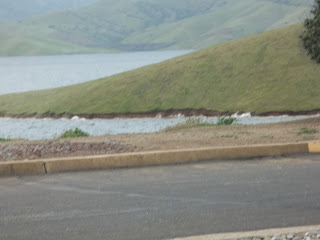 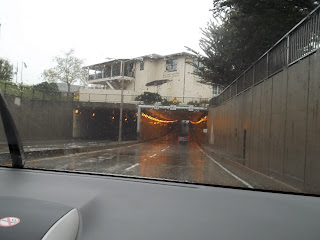 A tunnel in Monterey 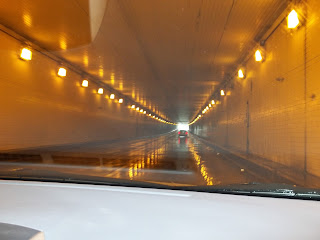 When we arrived in Monterey, it was pouring. We had a quick drive around including the famous Cannery Row where the author John Steinbeck lived and got inspiration for his characters and plots. Despite the pouring rain, I took photos. Then we found our hotel and checked in. What bliss! A warm, nicely furnished, dry room!!! Aahhhhhh....
﻿
Posted by Maria at 6:41 PM

Email ThisBlogThis!Share to TwitterShare to FacebookShare to Pinterest
Labels: travels in the US

Oh my! The weather did look bad. I hope it gets better for you.