Once again I'm joining in with Janine from The Rainbow Hare blog for Wool on Sunday, where all things ' yarny' are written up in a post. This month Janine has posted a number of projects including the cutest little toy, Peter Mouse. There is also a pretty little cardi and a market bag...

In July's W.O.S I wrote about the projects ( 2 knitted throws) that I hoped to have ready for donating to the annual parish art show...one was basically finished and I posted a photo in the blog post and one was just started. Good news, both were finished in time! The second throw was that old favourite of mine, the chevron garter stitch pattern, and it was done in my favourite colours. 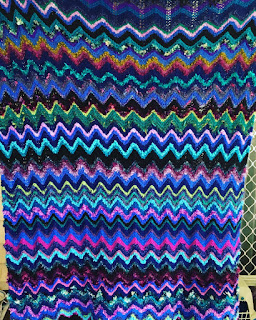 More about those 2 projects in my post about the art show which is coming up soon!

So after those 2 items were finished, it was time to get to work on making blankets out of all the donated squares I had been given by some very generous people. I hadn't had much time over the previous few months to work on those charity blankets, so it was a case of 'knuckling down' and catching up. There were bags and bags of lovely crocheted squares... 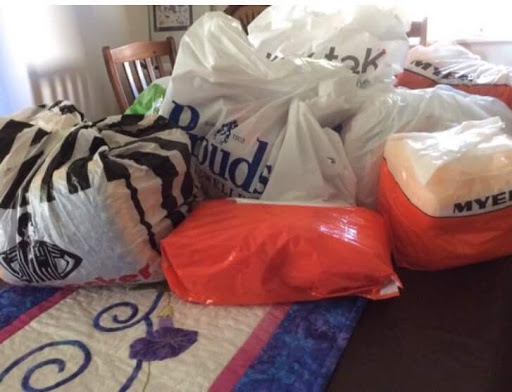 By the time I had joined squares to make 5 blankets, I thought to myself that I couldn't face making many more. But the next day, I was back there joining them. In just over a week, I made 15 blankets...I'd built up momentum and was on a roll...until all but 2 squares had been made into blankets. And I also had my little helper... 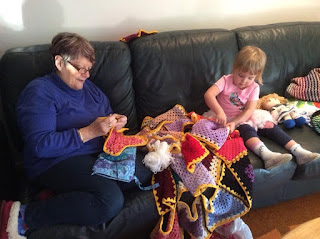 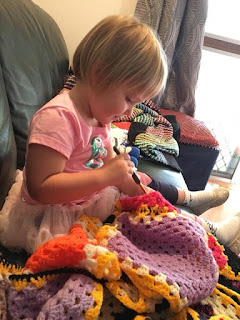 It's always better when there is someone with you keeping you company...
On Sunday night I stacked up the blankets for a photo...here are 14 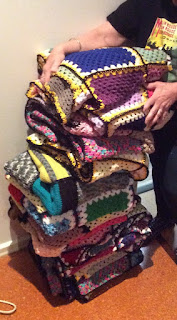 When we put the 15th one on the pile...over it tumbled! 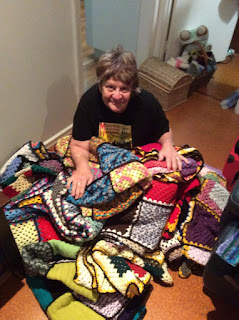 So these have all been packed in 2 big bags and are ready to hand over to K4BN for distribution to needy people. At any time of the year there is always a demand for blankets, especially for those forced to sleep rough.

Not my dotage...instead this post is about Eduardo, 'The Next Stage' cat. Ed will be 17 in September and has been getting rather skinny. 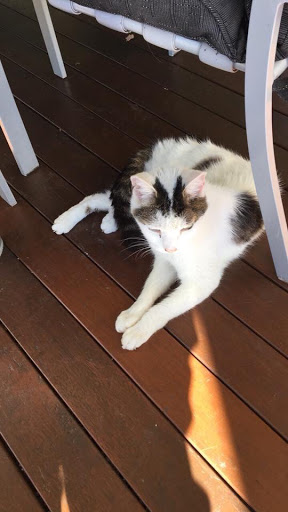 He was also having a bit of trouble chewing. So not quite 2 weeks ago, I made an appointment for him at the vet's for a check up.
So the cage was dusted off... 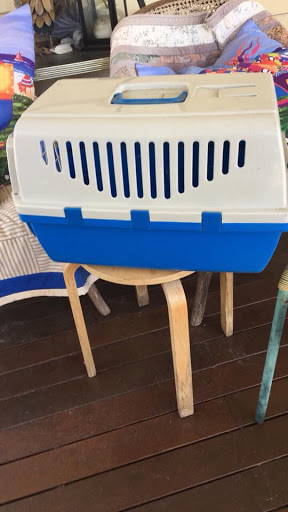 There are no photos but let's just say that Eduardo was most uncooperative in getting into the carry cage...I even have scratches that attest to that! He thought that a visit to the vet was really unnecessary. He howled all the way there...luckily only a 2 kilometre drive. Then he howled in the waiting room 😒. The veterinary nurses all came out into the waiting room to check out the cat with the 'fancy name', Eduardo Felipe, lol.
But as usual on a visit to the vet, when we went through to the consulting room, Eduardo was 'as good as gold'...he purrs!!! ( possibly a nervous reaction ? 🤣) In fact the vet had difficulty listening to his heart because of the purring...but in the treatment room he did stop purring for a short while when the blood tests were being done.
Kat, the vet checked him over...and my goodness he had lost a kilogram...not good!😔 Kat took blood samples which were sent off for testing and also a urine test which showed no bacteria or blood...so that was a tick! The teeth will need some attention but that will be a bit later. Kat mentioned 3 conditions that could cause his weight loss...one was hyperthyroidism...and next day she rang to confirm that that was indeed the problem.
Three methods of treatment had been explained to me and I chose the least expensive...tablets every day for the rest of his life. The most expensive was $1500 for a one off treatment using a radioisotope...no tablets...but he is nearly 17...😙
Now Eddie is very difficult to get tablets down his throat, but the tablets crush up easily and the vet was fine when I said that my cat LOVES Nestles Reduced Fat Cream and would it be okay to mix the tablet in a teaspoon of the cream...after all, he is nearly 17. Kat said some people mix crushed up tablets in with Vegemite or condensed milk. I did try the Vegemite but Eduardo didn't like it. 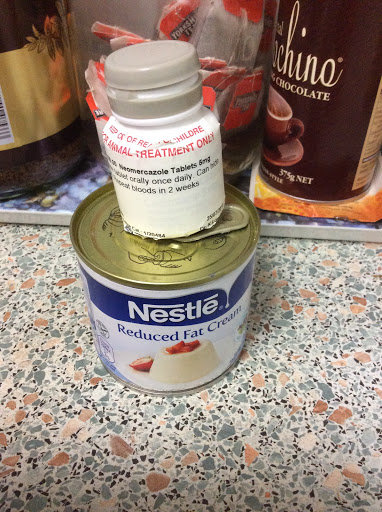 So each morning Ed takes his tablet...he looks forward to it! Lol. Next Tuesday we go back for another blood test to see if that dose is working. It could be my imagination but after 11 days it does look like he has put on a bit of weight.
Stay tuned...