So where else have DH and I been this busy August?

One place that we went to was the annual dinner for the Tingalpa Pioneer Church and Cemetery. DH's cousin, Pamela and her brothers have been involved with this group (Friends of Tingalpa Cemetery Heritage group)for a number of years. Through their father's side they are related to early pioneers in this area and of course these ancestors are buried in the little cemetery. The group, by their efforts have rescued this piece of history and have restored both the little wooden church and  the graveyard. You can read a little bit about the group here. DH is related to Pamela through her mother but we always support the group by attending this dinner every August. 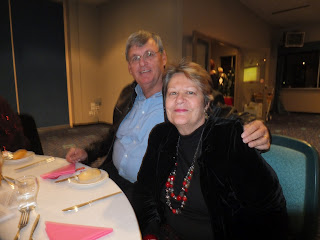 DH and I also went to see an Aussie made movie in August, 'The Sapphires'. It was a really enjoyable 'feel good' movie, set in the time of the Vietnam War. The Sapphires of the title are a female pop group who happen to be indigenous. There's humour, pathos and a few parts that made me cringe because the film touched on some of the racial issues, including the 'stolen generation'. But I loved the film. (we used movie vouchers that DH had got as gifts, so it was a 'cheap date :-) ) 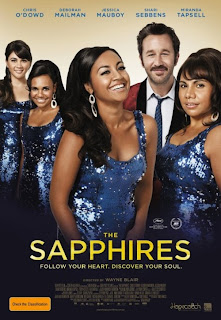 Friday night last week DH and I caught the train to the city and walked up to King George Square to the BrisStyle Indie Markets. And wow what an adventure...there were so many stalls... 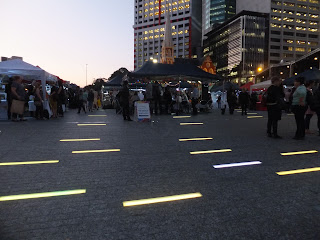 And all these stalls were selling the most beautiful handcrafted items.
That evening after we'd walked around the markets (well I walked and looked and chatted with stallholders, while poor DH 'hovered') we had another treat; dinner in the city.
But you know the 'gadabouts' still had one more special outing in August... DH was able to get some 'cheap tickets' to Cirque du Soleil Ovo from LastTix online. 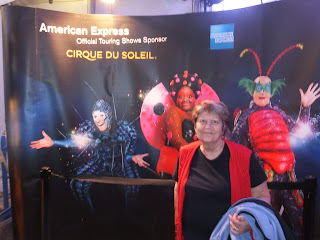 No photos of course during the show but here are some excellent trailers of the show here and here. What a show! The acrobats, highwire and trapeze artists were amazing, as was the imaginative set. A really enjoyable show. We were fortunate to get the opportunity to go and see it for ourselves as our friends have 'raved' about how good the Cirque du Soleil shows have been over the years, but we had never been.
Posted by Maria at 6:58 AM 6 comments:

So why do some people 'have to be somewhat unpleasant'?...

I've often mentioned the Knitting group, Knitting for Brisbane's Needy in my posts. I joined this group after retiring and have enjoyed being part of such a wonderful and giving group of people. The group is not a registered charity and does not attract any funding. Members live, not only in Brisbane, but in other cities and towns and in some cases, members live in other states.

The founder of our group, Karen Croke, does an amazing job. Karen entered the group in the Sunsuper Dreams competition for August. The prize is $5000 for the group who gets the most votes. Karen wrote on her entry:-


Knitting for Brisbanes Needy has been operating with no funding at all, for nearly 7 years. In that time members have lovingly made over 120,000 items including blankets, beanies, scarves, jumpers, toys etc which are then given free of charge to homeless; needy families, premature baby wards; chemotherapy patients; domestic violence shelters, Indigenous communities; animal refuges , in fact anyone in need. These items are sent all over Queensland, and in times of tragedy to other parts of Australia as well. 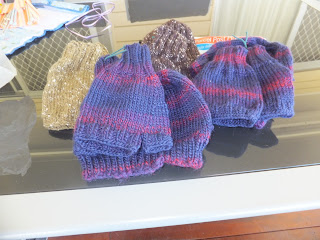 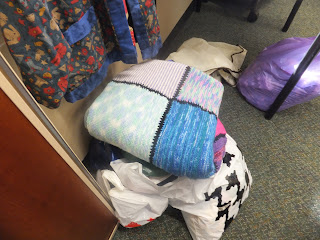 The members have worked hard to get votes and we soon got into first place. The group in second place have been working hard to close the lead. K4BN members have acknowledged that this group, an animal refuge in WA is a worthy cause but we had decided that $5000 would buy a lot of  yarn, fabric (we have non knitters who sew children's clothes for us) and toiletries for the hundreds of toiletry bags we hand out each year.
Both groups have checked out each other's Facebook page which is fair enough, but today things got just a bit nasty. #2 group posted messages on our Facebook wall suggesting 'that as we were just knitters' we weren't worthy of the prize money'.  ( I've used polite terms ) The offending comment was removed and Karen wrote a message on their FB wall...
'We may be just "knitters" (and crocheters, sewers and animal lovers). Not only do we donate all our items free of charge to the homeless, needy, but also we make and donate animal blankets, toys, items for wildlife carers etc. A lot of homeless people only have one friend, their dog or cat...and they love the fact that we also care about their pets. So, just to put it straight we are not JUST KNITTERS. We get no funding whatsoever, most of our members are pensioners who would rather not buy essentials for themselves but use that money to buy wool to help others, including animals, who are less fortunate.'
As far as I know there has been no response to this comment but possibly the post has been removed from their site...can't confuse people with some facts now can we? Being an ex teacher can sometimes be a positive thing. A number of my former students have decided to 'drum up votes from their friends' as have former colleagues of mine and many other friends.
If any Australian readers of this blog want to help, this is the link. My 'McAfee Site Advisor' acknowledges it as a safe site and link. The competition closes at 5pm on Friday, August 31. The group would be very grateful for any votes received.
As a postscript to the above; one of our members did some sleuthing on group #2's site and found that they have recently had a successful Trivia Night and have a 'street collection' (?) coming up shortly. We figure that they can delay winning the Sunsuper Dreams' contest for another month surely :-).

If, after reading this, you would like to vote for us, here is the link at which to vote!
Posted by Maria at 4:32 AM 7 comments:

Email ThisBlogThis!Share to TwitterShare to FacebookShare to Pinterest
Labels: knitting for others, P, working for the community

DH and I live quite a simple and frugal life, but we do 'splash out' occasionally when it comes to entertainment. We're fortunate that now that our children are independent, we're able to afford the pleasure of the theatre for example. Recently we had quite a run of outings that have been very enjoyable...

On the second Saturday in August, DH and I drove up to Buderim to attend a performance of a play, '1912-Titanic'. It was a production of the BYTE company (Buderim Youth Theatre of Excellence). This company is run by a former student of mine, Robyn, and the play was written by her younger sister Peta. I have been friends of this family for many years and am very proud of the achievements of not only Robyn and Peta, but also those of their mother Pat, and their brother Stuart.


The following are some photos that Pat took during the show...
Costuming was delightful, the acting superb...a very talented cast.... 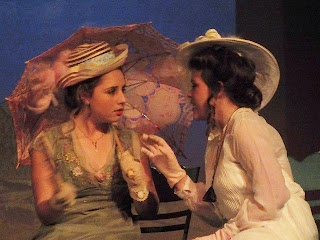 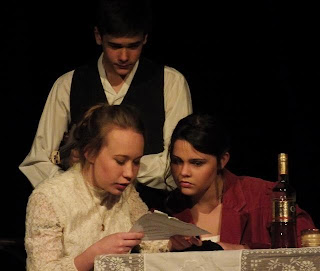 Peta, researched stories of 'real people' who were on the Titanic. She cleverly wove their stories from before they set sail with the voyage itself and of course, the sinking. As the production continued, interrelationships between these passengers were also revealed. All the 'pieces' were fitting together. Video footage was included and an excellent soundtrack. One delightful touch I thought was when the ship hit the iceberg, as well as sound effects, small chunks of ice were thrown in the dimness  from the stage! lol
Then the next day DH and I went to the theatre again...ages ago we had got some tickets in a group booking for Jersey Boys. We had seen the show in Melbourne nearly 3 years ago but had decided to repeat the experience. We were not disappointed...it was a fun night! 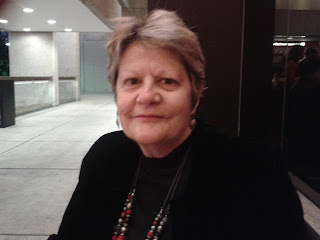 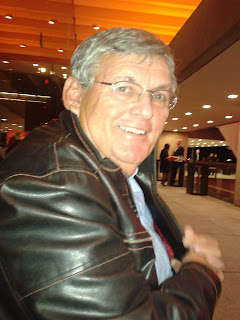 So 2 different theatre experiences in one weekend; how lucky are we? One, small and intimate with so much exuberance and talent and the other, a big production costing lots of money, but with the same enthusiasm and talent of the cast and crew.
Posted by Maria at 4:44 AM 1 comment:

In my last post I mentioned in passing, the name of the company from where I had bought DH's Christmas gift, Red Balloon. I have found this site to be the answer to the question, 'What do you buy someone who has all they need or even want??' Buying an 'experience' means less 'stuff' and I'm all for that! lol
Red Balloon now has gift experiences for each state and territory of Australia. In the USA, there is a similar site, Excitations. On the Red Balloon site there is some information on similar International companies here.

Today I not only posted a parcel but I received one too! The one I received, was from Nicole in South Australia, who was my swap partner in a Potholder swap through the Down to Earth Forum. Nicole has cleverly used some doilies and some lovely thick woollen fabric to make 2 lovely potholders. As well she included a beautiful knitted washer...a lovely surprise. Thank you Nicole :-)


The outgoing parcel was to my swap partner in the Once a Season Swap (OASS) over at  Gone Stitchin'. Rummaging around in my 'paper' drawer, I found some green cellophane and some ribbon which I'd saved and rolled up. It had been tied into an enormous bow on a gift basket that DH won a year ago. It was just perfect for a 'Spring' gift.


And lastly, here is Eduardo looking cute as ever :-) 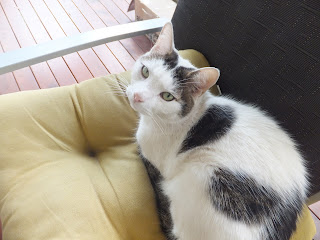 Email ThisBlogThis!Share to TwitterShare to FacebookShare to Pinterest
Labels: swaps

Last Christmas, I gave DH a gift that I bought through the Red Balloon site which specialises in 'experiences' rather than more 'material type' gifts. I have now purchased a number of this type of  gift; dinners, a session in a flight simulator and an A3 canvas print from any photo that a recipient chose.

Last Christmas I chose a 'behind the scenes' Tour Gift Experience of Doomben Racecourse, here in Brisbane. And yesterday was the day that he organised to use his voucher. So, dressed in his suit, off he went yesterday morning with strict instructions from me that he had to take photos for a blog post
:-) 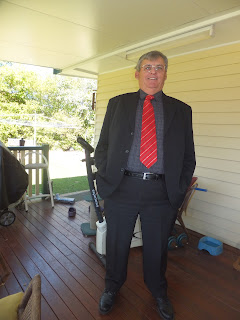 DH rarely wears a suit, but yesterday he donned one ready for his tour...


The tour included entry to the racecourse, morning tea, meeting a jockey in the jockeys' locker rooms, watch the weigh in and watch the start of a race at the barrier stalls. The people on the tour also meet a trainer in the mounting enclosure and also stand with a race caller as he commentates. 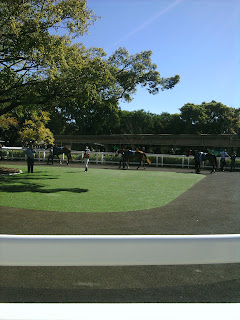 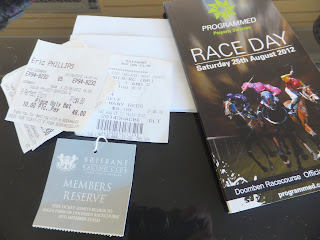 When DH came home 5 hours later, he reported that it had been a wonderful gift and that he had really enjoyed the experience. I asked him were the men with the large leather bags (bookmakers taking bets) there and he said no...they have computers these days, no 'pencillers' or anything like that!