Once again I'm joining in with Janine over at the Rainbow Hare blog for Wool on Sunday.
Just over 3 weeks ago I was asked if I could donate a knitted throw to be used as a raffle prize at the Quilt and Craft Show that has been organised by our parish for next week, July 14-15. It had worked out perfectly, as I had felt a little guilty that I couldn't help at the show as it clashes with DsD1's wedding. ( the family will all gather at Noosa on the 14th, ready for the nuptials on the Saturday 😊)  So being asked for a raffle prize meant that a I can still help.
But it wasn't a lot of time to actually make a throw, but again, as luck would have it, I had that WIP throw that I had started in Adelaide. 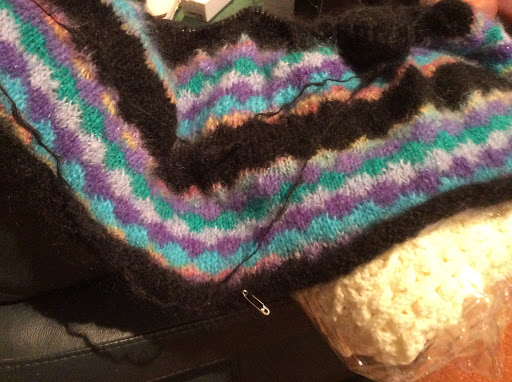 I had also knitted on the train and in the evenings in Darwin, so even though that project had been put aside when we came home, the piece did measure about 40 cm.
So...I resumed knitting this throw, and by last Monday, it was finished...phew! I didn't particularly like this project at the beginning as I chose the colours hurriedly when I was packing at the last minute to head to Adelaide. But I'm happy to say that I changed my mind, the longer the piece grew. 😊 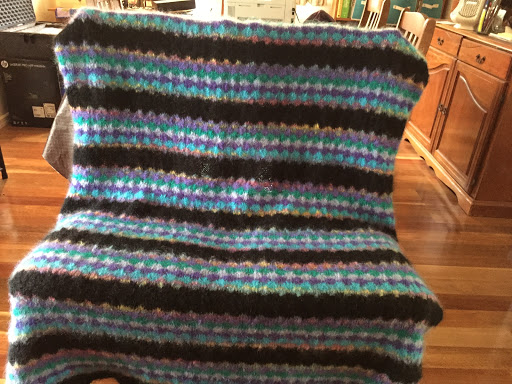 And DH suggested he hold up the throw while I took another photo. He is just over 180cm tall so it gives an idea of the size. The pattern is a slipstitch design that I use quite often and the yarns are mohair. 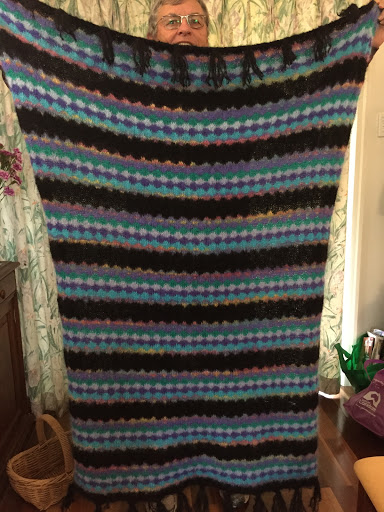 Check out Janine's Wool on Sunday post Here
Posted by Maria at 12:59 AM 11 comments: