The last Tuesday of the month K4BN has a Knit and Natter at the Zillmere Community Centre. Today I took my camera to capture some of the action. As well as the group of women who sit around the long tables, knitting, crocheting and chatting, there is also a constant stream of people who just drop off big bags of donations. I never ceased to be amazed by the amount that is collected from this K&N. Today a large number of donated toiletry bags (filled with toiletry items) were handed in as well as all the knitted and crocheted items.
Here's the entrance to this busy community centre... 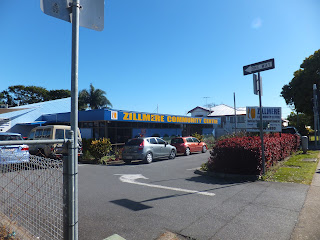 Today's donations of knitted/crocheted items numbered over 140 with 30 of those being blankets.
Posted by Maria at 11:52 PM 5 comments:

Email ThisBlogThis!Share to TwitterShare to FacebookShare to Pinterest
Labels: crafting and the community, knitting for others

Not my favourite colour even though I do have brown eyes! lol  Once again I'm joining in with Evi over at Sister Sun and selecting photos to share with a theme colour. 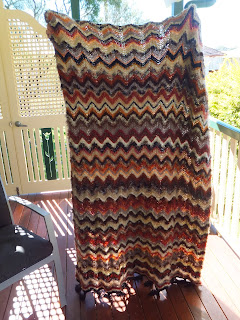 How is the garden going...

This post will be mainly about the vegie garden and this would be the part of the garden where I put the most effort in. This time last month, the new garden bed looked like this... 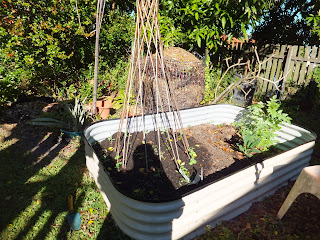 In the last month we've had over a week of rain and yesterday this is how the bed looked.... 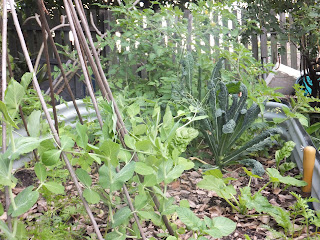 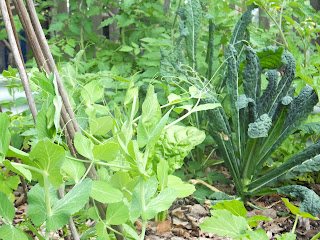 ﻿Earlier this year, I planted a piece of sweet potato vine that had broken off, into a large pot. It has continued to grow and I've wondered whether any sweet potatoes had developed. It really was a bit of an experiment to see whether a pot was a suitable way to grow the kumara.
We really are fortunate that winter does not adversely affect the gardens here. In fact, the number of garden pests is quite low during winter so the plants tend to thrive. Winter time in the subtropics is traditionally a dry time of year but the last few years have seen significant winter rains which further boost our plants and trees.
Posted by Maria at 3:13 AM 2 comments:

Email ThisBlogThis!Share to TwitterShare to FacebookShare to Pinterest
Labels: gardening

We went to the Gold Coast but we didn't go to the beach...

Yesterday DH and I met some relatives who are on a cruise. The ship was in Brisbane just for the day. Now these relatives could be classed as 'ex relatives' because they are in-laws from my former marriage. But luckily for me many of my ex husband's family are still quite comfortable being friends with not only myself, but in Murray and Marlene's case, they have been so welcoming to DH. We've had invitations to family weddings and have stayed with M & M and when my former MIL died, DD2 and I flew to Melbourne and stayed with them then.
So when DH and I were in Victoria in June, we spent time with the extended family which now includes M&Ms grand-daughters. We already knew of the upcoming cruise, so in June we planned what we would do when the ship docked in Brisbane. Marlene's sister and her husband bring a caravan up to Queensland each winter and stay in Coolangatta. The plan was that we would pick up M&M and their youngest son, Terry, drive them to the coast and we would all spend the day with Jack and Carmel who are in the middle of their 2 month stay.
So yesterday morning we set off to the passenger terminal at Hamilton. At midnight the day before, Brisbane's  Airport link tunnel opened to traffic and for a while it is toll free, so naturally we drove through it as it shortened our trip to Hamilton considerably. 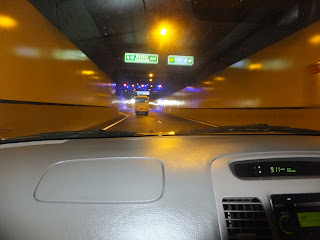 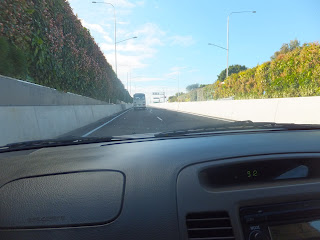 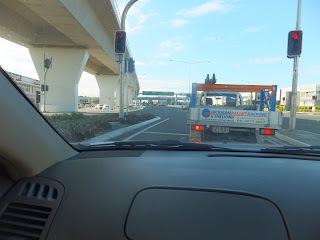 When I went into the terminal our tourists were dressed in summer gear as they expected that Brisbane would be very warm. Luckily they had jackets because it does get quite cool here in July. Then off we went to the coast. 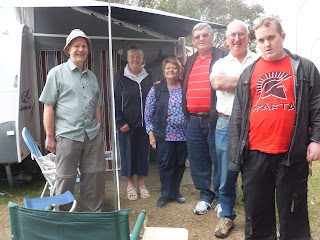 We had a little tour of the new caravan and holiday park, lunch at the local bowls' club (which is huge), some more chatting and coffee back at the holiday park. Then it was time to head back towards Brisbane before the traffic got too heavy.
A little while back I wrote a post about the Gold Coast here and I included photos of the beaches and street scenes. the cruise that the 'rellies' were on, leaves from Sydney and circumnavigates Australia. It stops at a number of places including Geraldton, Broome, Darwin, Port Douglas, Airlie Beach and of course Brisbane. The cruise also stops in Lombok in Indonesia. Tours are arranged at each stop but yesterday DH and I were the tour directors! lol
Posted by Maria at 2:27 AM 1 comment: