And what a year it's been. DH and I have been fortunate this year as the dramas of family life haven't been as 'cataclysmic' as some years have been...just the usual up and downs.
DH and I worked together on 2 elections in March and April; he as the Returning Officer (boss) and me as his clerical assistant. It was work like nothing I had ever done before. But I thoroughly enjoyed taking orders and having no real responsiblity other than to do as I was asked. So different from teaching!

After the elections we took a break and went to Victoria for a lovely holiday visiting the goldfields' towns and finishing up with a few days in Melbourne. Naturally the laptop came with us and I blogged about all our travels.  DH also played some golf competitions away from home and this year I went along too. As well as travelling farther afield, I also blogged about places in my city.

I continued with my knitting groups and my beloved Sisters of Stitch. I continued to make my knitted throws, crocheted throws and beanies; mostly for charity but I did make a few for gifts to friends. I also made 7 throws by sewing together squares which had been knitted and donated to K4BN.

Our parish embarked on lots of activities for fund-raising (including a fete) which I also  became involved in enthusiastically.

This year I became more involved with blogger swaps and as a result 'met' more fellow bloggers and I find that the more blogs I read, the more I learn. Becoming involved in swaps meant that I also worked on more sewing projects. I tend to be a lazy when it comes to knitting vs sewing; sewing needs more preparation than just picking up some yarn and a pair of needles...but that is changing! lol 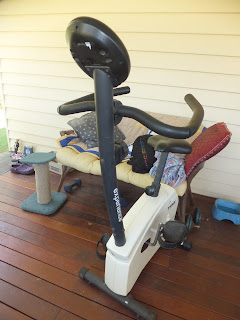 This year I also made the conscious decision to listen to the message that the cardiologist had been 'sprouting' for 6 or so years...give up the carbs! So starting at the beginning of May, I have avoided sugar. Not easy, as I think that I was actually addicted to the lovely  stuff! lol. I continued to ride the exercise bike each day but this year the weight started to come off so now the 6 monthly visit to the cardio is quite pleasant!

Despite avoiding sugar, I still continued my regular meet ups with various groups of friends...everyone is now used to my not eating cake or dessert...

In May we had a family engagement and that will be followed by a wedding in May 2013. DH and I are now wondering whether there might be another engagement in 2013?? Meeting DsD1's beau and seeing how happy she is was the best Christmas present!

In late November my pregnant niece developed complications...it looked like the baby, due on Christmas day would have to be induced 3 weeks early... my niece's condition was closely monitored and gradually all appeared to right itself and the pregnancy continued. December 25 came and went...nothing happened. And then today my niece's baby was born; a boy, 4.5 kgs, 53cm long and named Maximo Floyd. What a wonderful gift to usher in the New Year.

Email ThisBlogThis!Share to TwitterShare to FacebookShare to Pinterest
Labels: 2012

Yet again! I've been sorting through those boxes of photos

If you remember, one of my goals to work on after I retired, was to work my way through the boxes (and boxes) and albums of photos that I seemed to have amassed over the years. My idea was that I would sort the photos into different categories and then scan the photos to make digital albums. There would be a copy kept on our portable hard drive and then there would be copies stored in either my Facebook account and/or my Box account. The latter 2 methods of storage mean that there is yet other copies which can be retrieved from any computer not just ours. The Facebook album of my mother's family has been brilliant for all the younger  members of our extended family as they can copy photos for themselves.

One lot of photos that I've been putting aside for quite a while and have quite a pile, were photos taken at functions and celebrations at our church. The other day I had fun scanning and putting together a digital album of a concert we had in 1992 to raise funds...and we had lots of fun!

Everyone helped in some way... 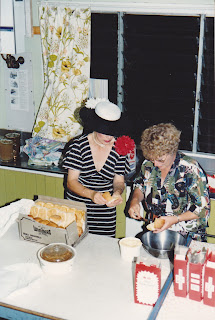 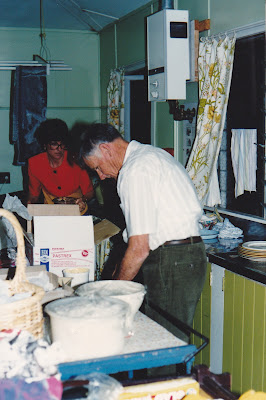 Some of our young parishioners provided musical items... 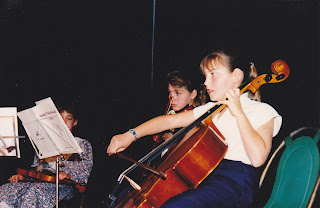 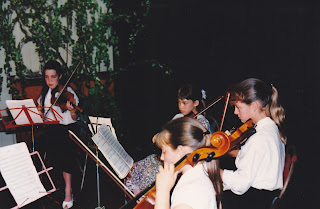 Then we had an item from 'Les Mis'. Adrianna is still involved with music now in her middle 20s 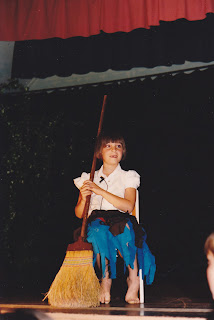 The ladies guild worked on an act too...a medley of songs from 'My Fair Lady'... lots of rehearsals for that!

After Intermission we had 2 melodramas. The casts in these had just a few rehearsals due to work commitments...but that made it even more hilarious!
Melodrama # 1
Melodrama #2
Father Neville organised this in friendly opposition to our Melodrama#1! They had had less rehearsals than us...and it showed! lol But young Peta was brilliant as Poppy the poor heroine....


There were heaps of other musical items and also some dancing. It was a great night and it's been fun to 'look back'.
Posted by Maria at 12:40 AM 2 comments:

The family got a lovely surprise this Christmas. DsD1 has been quietly getting to know a young man who lives on a property close (ish; I think the property is about 60km away from Wandoan) to the school where she has been posted these last 2 years. Friendship has evolved into love and DsD1 is absolutely radiant! Last night DH and I, plus my BIL and SIL met the young man  when the couple came to dinner.

He is from a grazier family and although we had tried to buy some meat for the BBQ at a specialist butcher, this butcher did not really have any cuts that would be suitable for cooking on the BBQ, so...we ended up with 'supermarket' steaks, chops and sausages. And our guest complimented us on the meat's quality! (polite?)  It was a lovely evening and even though lots of questions were asked of our guest, I'm sure he didn't mind. :-) 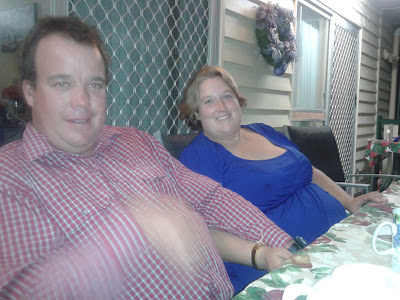 After Christmas I've been organising a couple of new craft projects...
It was amazing what I found in my stash that fitted the theme, sewing. The other morning I sat and fussy cut quite a few of the hexagons but still have to work out what I'll use for the squares. I'm making something for my first swap of 2013 and, for now, it's a bit of a secret :-) It's not a table centre like the photo below but I will use the same layout for this project.


Another secretive project that I've started is some knitting...the yarn looks grey but is actually black...it's not for a swap, but a gift for someone... 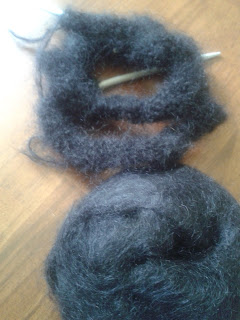 Another little task I've been doing is sorting through some boxes of photos. While DH is 'glued' to the TV watching the cricket, I sit on the couch and look through the photos and collate them  into groups and/or themes. I have found lots of photos of parish life from when my children were little. So far I have shared an album of photos of a 1992 parish concert on Facebook, much to the delight of former parishioners, as well as present day ones! In a later post I'll share some of them :-)

On Christmas Eve, the family gathered at our place... We started with a lovely spinach dip made in a hollowed out cob loaf that has become a speciality of DD1. Then it was time for the prawns that my brother brings each year... 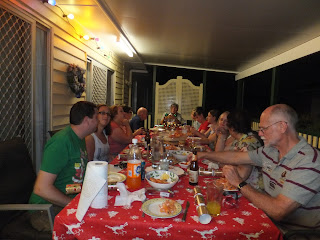 The main course this year was a variety of roast meats, accompanied by 3 large baking dishes of baked vegetables, steamed greens and gravy. 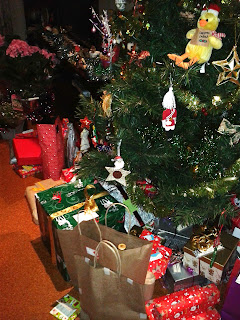 I had put a lot of wrapped gifts under the tree but as the family arrived the pile of presents grew dramatically. (I always get a bit 'thingy' at this time because I feel that there are too many presents but the family chooses to ignore my suggestion that they limit the spending :-/)
The pile of presents was just so overwhelming, that I suggested that each person, hands out the gifts that they had bought and I would hand out the Secret Santa gifts that the 5 girls do between them. So pretty soon the dinner tables looked like this! 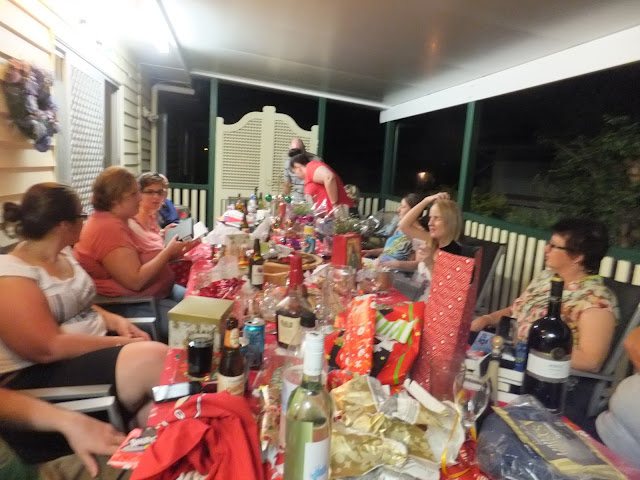 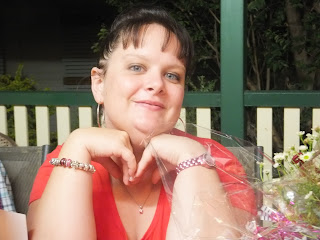 Then on Christmas Day we went to my BIL and SIL's place for lunch... more food and more presents! lol
But we'd already had a cooked breakfast with DD2 who had come  over about 8.30. 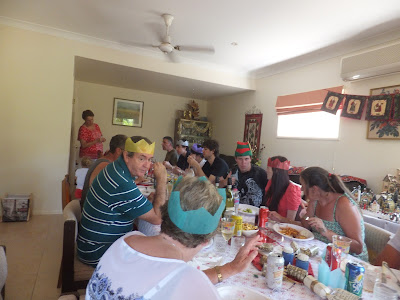 Now a couple of photos of the Advent swap goodies... 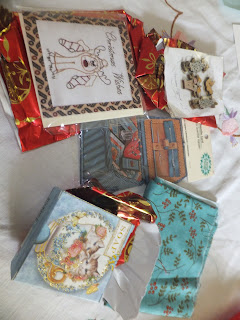 Haha! Blogger keeps turning this photo on its side...All these beautiful items from Cheryl took me up to Christmas Eve... On Christmas morning I opened the last parcel and what a lovely surprise!!!

So that was Christmas! And pretty special it was too :-)