When I retired in 2011, I joined a group called Knitting for Brisbane’s Needy ( K4BN). This group made items of warm clothing for distribution by various groups and charities who give support to the needy in the community. As well as warm clothing, knitted and crocheted blankets and quilts, the group provided toiletries, sewn garments, knitted, crocheted or sewn toys and various other items such as school supplies that could help make people’s lives a little happier. The group had been started by Karen Croke who had seen a need in the community to help community organisations who endeavored to help the plight of the needy and disadvantaged in not only Brisbane, but also Queensland wide. Karen was helped by her husband Peter and I believe the group started with just a few people but the numbers increased as the word spread.

The group had a number of Knit and Natter groups, which provided a social gathering as well as a collection point for donations. Over the last 16 years the group has distributed hundreds of thousands of items.

At one stage in the last 10 years, I was a member of 5 Knit and Natters. One in a private home was disbanded about 5 years ago and a new venue was never found. Then in recent years I’ve had more calls on my time to do ‘Grandma Duty’ so not so many K&Ns for me. 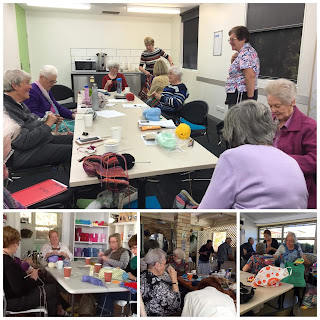 I’ve made lots of new friends over these years, been given lots of ideas and patterns by others and have had a thoroughly enjoyable time.

But a few years ago, illness struck Karen…a severe illness at that. Then early this year Peter was also struck down by illness.

So it really wasn’t a big surprise that in April this year it was announced that K4BN would be wound up. It was obviously a big decision and not one made lightly or without much soul searching. 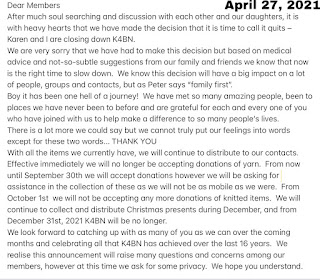 In a conversation with Peter, he indicated to me that they had decided to completely close and not merely do a handover to someone else to run this completely voluntary organization. In the 16 years he and Karen had built up a well deserved reputation of being reliable, as well as being supportive, compassionate and caring towards those who were doing it tough in our communities. They feared that if run/managed by others who didn’t have the same commitment to the needy, then the reputation they had built up would be tarnished. They just didn’t want to run that risk.

Sure enough, after that announcement they were inundated with offers to take over. Eventually Karen wrote a post which I copied and saved at the time because it really showed how much this couple had done over the years…a lot of it, quietly in the background. I’ve masked the name of the member, who had suggested how the group should be run as Karen addressed this to her. 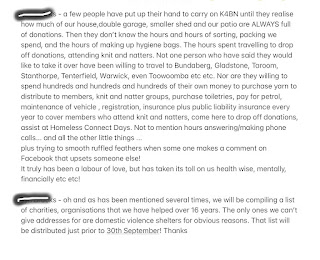 So here we are in September and that means we are having our last K4BN Knit and Natters in these next few weeks. But that’s not the end of this story. Friendships have developed and even though some groups will disband, many of us are being ‘rebranded’ 😜 and will continue to meet regularly and will continue to  make items for needy people. But it will be on a much smaller scale as each group will make lists of community groups we’d like to help.
For example my favourite K&N group at Albany Creek will now become ‘Knit, Crochet, Donate’ (KCD) Albany Creek and our ‘sister group’ is KCD Strathpine. We’ve had a meeting where we discussed the charities we’d like to support and we’ll only make what the charities need. The Albany Creek Library agreed to continue to let us use the meeting room for free as long as we donated to local charities…too easy!
Many of us members have friends and family who have supported us by making and donating items to K4BN over the years and I’m forever grateful to these lovely people who have given me the most beautiful and useful items to pass on to K4BN. Hopefully this relationship will continue albeit scaled down somewhat. One thing KDC decided on, no fundraising so I won’t be pestering friends and relatives to buy raffle tickets any more! 😜
So wow! This post has been very wordy but it’s a post I felt needed to be written.
Here’s a photo of Karen, such an inspiration to so many of us. Not only for her amazing compassion but also her dignity and determination as she lives with an illness that has taken so much of her energy
, faculties, independence and mobility. 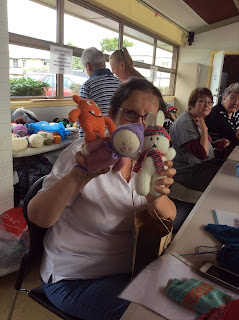 Karen and Peter decided that despite closing down, that this year from September to the end of November they would accept items that could be used as Christmas gifts to the charities that the group usually supported. So I’ll finish the post with some photos of past years where members were packing the famous K4BN mini Christmas stockings. 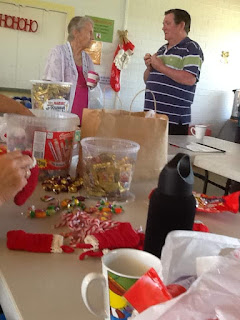 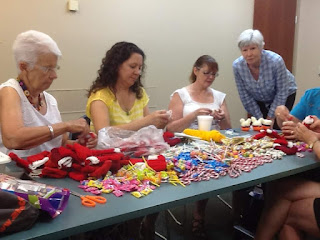 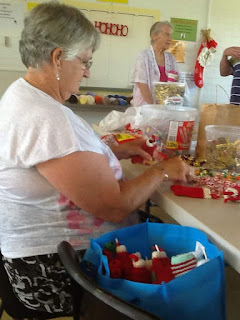 Goodbye K4BN and best wishes to Karen and Peter as they spend more time with their daughters and grandchildren.

Maria, what a generous couple. That is great that you will be able to keep meeting up in small groups. I am sure many people have been helped by the lovely donations over the years.

What amazing dedication, over so many years.

I hope your "new" small group find some good local projects to contribute to, and have years of happy knitting and nattering sessions ahead.

It’s sad when groups close down
I’m glad you will keep going in new and exciting ways
Our knitting group, which we also crochet and sew! Has been unable
To meet due to lockdown but we all continue working away at home and once we meet again
We usually have a huge bundle of things to send off

That is excellent news. The friendships will continue to grow as well.

Great post Maria….Karen and Peter have done an amazing job over many years with the help of many…
Good luck with your new group who’ll continue to knit, crochet and sew up a storm for folk in need. ❤️

I too have been away on Grandma duty so when I finally checked into to bloglovin again I was pleased to see your post. As you know, I've always been amazed and impressed by the huge generosity of you and your groups but I had never appreciated the scale and all the logistics involved in organising and distributing all that knitting and crochet. Karen and Peter really are heroes. I hope they enjoy having more time to relax and spend with their family. I'm glad you've got the KCD now so you can carry on knitting and nattering :)

I hope that both of them finally get to relax and spend time with their families. I am sure they will be dearly missed and they will miss all of you.

Still it is a good thing that you will still be meeting in different groups to continue the good works they started in a way you are all keeping the faith and helping those in need.