Well yesterday at New Farm Library, there was a Blogging Workshop presented by a fellow Brisbane Blogger, Jean. I thought that it would be an excellent opportunity to meet Jean, so I went along.
New Farm is on the north side of the river and is an example of industry moving out and  being replaced by gentrification of the suburb. We turned into James St (now very posh in parts lol) and met traffic that was hardly moving...
DH felt that the traffic jam was caused by people slowing down to look for carparks in the trendy section of the street which contains cafes, restaurants, nice (expensive though) shops and the cinemas. And he was right, because after we drove through that area, the traffic moved smoothly.
Not the best shot but a quick glimpse of the old Queens Arms Hotel. Once very much a workers pub, now refurbished a number of times that I can remember, and more upmarket. When I worked at  Fortitude Valley, we sometimes had staff dinners at this hotel. 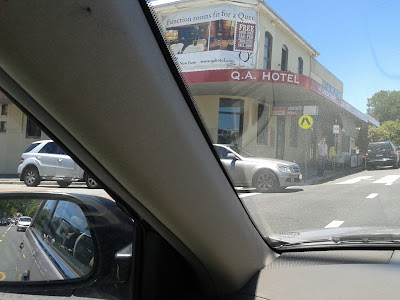 The traffic had held us up a bit, but I got to the library with 5 minutes to spare before Jean's workshop began. The library is in a beautiful spot with the huge New Farm Park over its back fence. While I attended the workshop, DH did his daily walk but yesterday it was on the path through the park, past the Powerhouse complex and down the river path...

Now because I've taken so long to 'set the scene', I'll have to write about the wonderful workshop tomorrow. I try not to ever miss a chance to post photos of Brisbane as I know that some readers enjoy seeing photos of the city as they once lived here. If you used the link to Jean's blog, you will already have read about the workshop, so I will write just a bit from my perspective and then also post some photos of the trip home! lol
Posted by Maria at 6:52 PM

It's all so new to me yet i also worked in The Valley, wow how things have changed.

Hello Maria.Thank you for linking to my blog. It was lovely to meet up with you face to face at last on Saturday at the workshop. One of the things I like about your blog is your travel diary. Just because I live in the New Farm area I take all the new developments for granted. It's different seeing it through other people's eyes. My brother and sister-in-law who will be visiting us from the UK in March have already read your post today with interest as it features the streets they will be travelling when they get here. You are reaching across the globe.

Hi Maria, Ryll Paul here, I met you at New Farm Library and was interested in following your blog, so here I am (very enjoyable blog Maris) - I have made two posts on my blog since that day - I am gathering my confidence to keep on keeping on - Lovely meeting you Cheers