Regular readers would know that I am a member of a charity knitting group, Knitting for Brisbane's Needy. A few weeks ago, I approached the founder of this group and asked her if she would like to be a guest blogger...and she agreed. So, here's Karen! 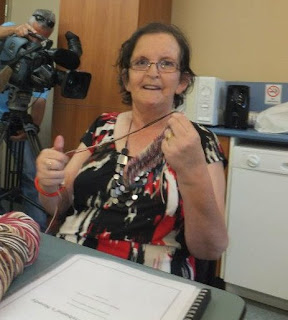 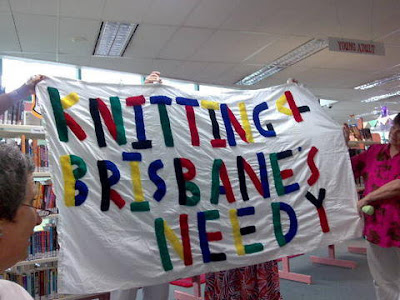 Hello, my name is Karen Croke from Knitting forBrisbane’s Needy, and Maria has invited me to be a guest writer on her blog to talk about the work of the group.

I started the group in 2006 with just 2 members. I was inspired to start the group after a chance meeting with a welfare officer from a not for profit charity, who helped homeless/needy families. She mentioned that Queenslanders didn’t seem to donate warm clothing as it was thought that it didn’t get cold enough in Queensland. When the welfare officer mentioned people being cold, living under bridges, in parks, doorways of buildings etc, I offered to knit some beanies and scarves. And that is how the group started…
Membership has reached over 400 members, who have provided more than 150,000 items up to December 2012 (including   41,000+ donations just in 2012 alone). K4BN receives no funding and all yarn is donated or bought by members themselves. (Although last year the group won $5000 which was a wonderful boost for buying supplies)

Now I mentioned that way back in 2006, I offered to knit scarves and beanies, well it wasn't long before many other items were added to the list of what the groups makes or collects for distribution. We make ‘Premmie’ and baby clothes (including booties, beanies, jackets, mittens, blankets), children’s beanies, gloves, jumpers, vests, scarves and probably most importantly, TOYS. 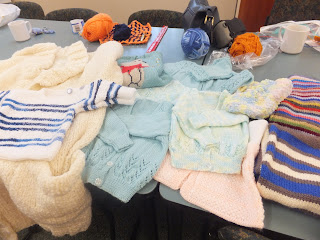 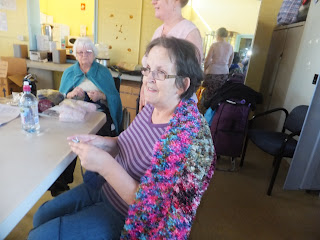 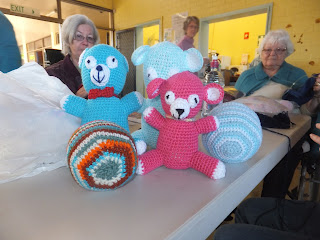 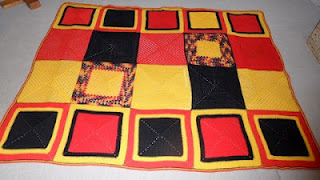 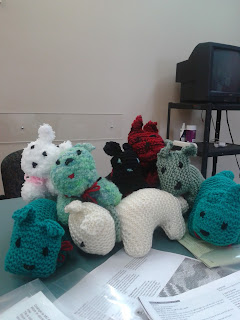 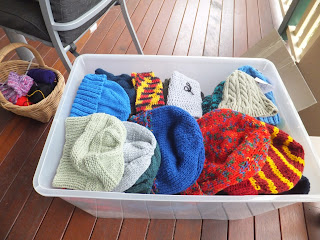 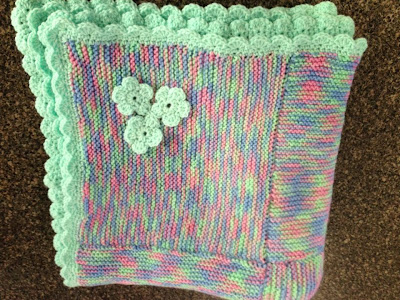 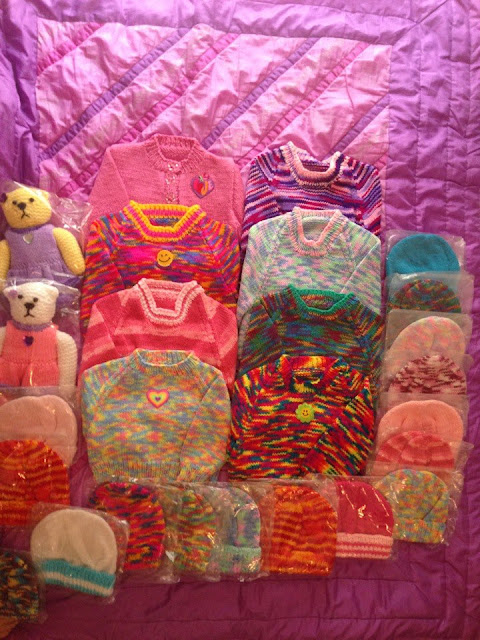 We make adult beanies, scarves, gloves, jumpers, vests and blankets; the latter we just never seem to have enough to keep up with demand. We also make blankets and toys (mainly for cats and dogs) to go to animal refuges. Another item that is in great demand are unused toiletry items to go into the hundreds of ‘hygiene packs’ our members make up each year for distribution to those in need; not only for the homeless but for those in domestic violence shelters, those adversely affected by natural disasters etc. 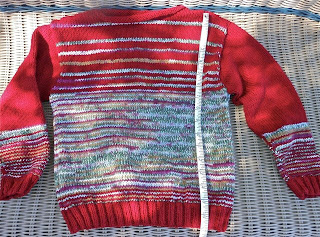 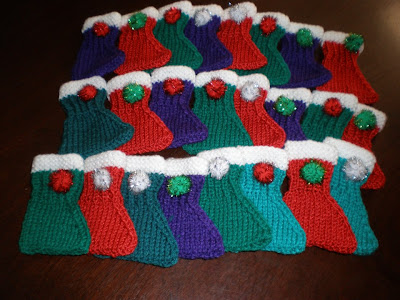 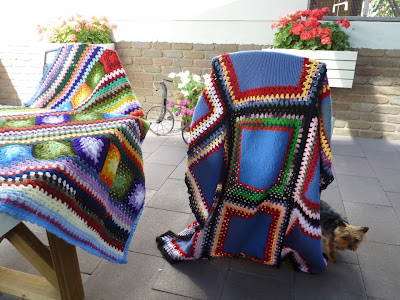 Angela Fohler ( one of the original members of the group) had made one of her incredible quillows in the indigenous colours. As soon as I saw this older indigenous man walking around I knew I wanted him to have the quillow, even before I spoke with him. When he got over to us, we gave him an indigenous beanie and then I offered him the quillow. I just can't explain the look that came over his face, it was one of incredulence (is that even a word??); he just held it and touched it, but then wanted to hand it back. I asked him why, "Because I have a beanie, someone else will need that".
I told him that I wanted him to have it, and at that, he hugged it to himself and then started crying. When we asked why he was crying he said it was because "no one has ever, ever given me anything in my life and now you have given 2 things and in my traditional colours". He then told us some stories of how he (and others) have been treated; spat on, sworn at, had their possessions stolen etc etc. He had just moved into some hostel type accommodation after many years of being homeless, after leaving the Australian Army!!! He was very proud of the fact that he had a key to his room, so he knew his beanie and quillow would be safe!!! Of course, by then I had joined him in crying!! I think after that he came back every 10 minutes or so, to thank us again and Bless us for making him feel "normal". All the time he was wearing his beanie, and hugging his quillow. Needless to say, when I went home that day I started on another indigenous beanie!

It’s stories like that, that keep Peter ( my husband) and I determined to keep doing what we do for the needy, as long as we are able to.
Posted by Maria at 4:09 AM

Hi Karen & Maria .. What wonderful work K4BN is doing. I love the story at the end - makes me want to fossick in my stash for some suitable colours to make a few indigenous beanies for K4C. Have a lovely weekend. xoxox

Thank you Maria for inviting Karen to be a guest on your blog.
Your knitting group is the core of all that is good in society. The story you included Karen just says it all. The fact that the man, who had so little, wanted to give the quillow back so that someone else could benefit, was so touching.
I loved all your photos Maria and can imagine the joy a new Mum would have wrapping her baby in one of those shawls. Those toys are so happy and bright, and all the clothes, beanies, quilts and blankets will all end up in the hands of people who need them.
Bless all of you for your kind hearts and willing hands :D)