'This will stick to your ribs!'

The rather cryptic subject line of this post was a favourite saying of my mother's when discussing a food/meal that would satisfy the eater's hunger for many hours...possibly what we now describe as low GI food????
One such food that my mother referred to as 'sticking to your ribs', was porridge. In winter time I really enjoy rolled oats and occasionally prepare some.
But I discovered another way to prepare it (well new to me that is!) earlier this year, when I read a post on Rhonda Hetzel's blog, Down to Earth. Rhonda wrote about soaking or fermenting grains as a way of preparing them...this was new to me. I had always just copied my mother's porridge making technique...put oats in saucepan, cover with water, and then simmer on the stovetop, all the while stirring to avoid the porridge sticking to the bottom of the pan. This is part of what Rhonda wrote...

'All grains, including oats, contain phytic acid, which can combine with minerals in the gut to block the absorption of nutrients in the grain. Soaking or fermenting the grains beforehand releases enzymes to help breakdown the phytic acid and gluten which is present in many grains, especially wheat, but oats as well. Oats contain more phytic acid than any other grain so it's important to soak them.'

So I thought I would try this method...it was easy enough and Rhonda also commented how 'creamy' the porridge was...I liked the sound of it!
Apparently the 'quick oats' varieties are not that good for you, but of course the Cereals' section at the supermarket was full of those varieties! Good old 'homebrand' had the 'ordinary' rolled oats... 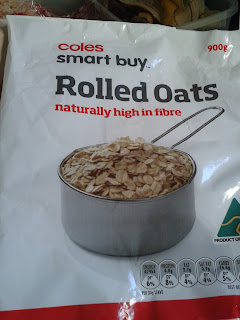 So before going to bed, I put some rolled oats into a saucepan, covered the oats with water and stirred in a heaped tablespoon of yoghurt. (Rhonda's recipe says half a cup of yoghurt but the smaller amount works fine). Put the lid on the saucepan and leave overnight. 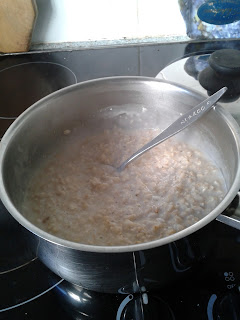 In the morning you find that the mixture looks as though the porridge has been simmering...so you just warm it gently, adding more water if you think it's too thick.
It is really nice! I chop up some fresh fruit and stir in some plain yoghurt and I really enjoy it! 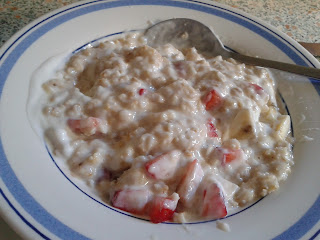 DH (who is normally a Special K type of person) has started eating it now but he usually just has it with milk.
If you want to read more of Rhonda's post, you'll find it here.

This is interesting Maria. I eat porridge year round, I'll be trying this way of preparing them. Do you know anything more about the quicker oats because I usually buy them as they cook quicker, but you have me wondering now if I'm getting the most benefit.
I see that you, also, follow Rhonda at Down to Earth. Marvellous blog. I bought her book too and had her sign it when she was at Dimmocks in the city. I use her green cleaning 'recipes' too. They work just fine and without the chemicals.

I eat oats year round and have been using this method for years,too, in fact there's not many foods now I don't soak to ferment before cooking, especially legumes and pulses. I add cinnamon to my oats and a bit of coconut oil after cooking...or you can use butter (not marg) as the fat helps your body absorb the goodness from the oats. For Jean, instant and quick oats are rolled thinner, the instant being really thin, nutritional value is the same, but you lose fibre or roughage, as they cook down quite mushy.

I love Rhondas blog. I must of missed the one with the porrage. I think it would be an excellent way to prepare it especially if you don't have time to cook it the other way. I always cooked it the same way you did. I'm going to give it a go. Xx

Another one going to try the steep overnight method - the Golfer does this with his muesli (which is mostly oats anyway). I often use the microwave for the porridge but it doesn't always turn out great; still chewy lol does it still stick to the pot doing it this way?
Thanks for your email Maria - replied earlier today
Cathy