'Imitation is the sincerest form of flattery...'

This old saying came to mind when I visited a friend a few weeks ago. A few years ago this friend asked me to show her how I make my chevron (ripple stitch) throws. She was a great pupil and she soon got the idea of the 'increasing and decreasing stitches' to make the zigzag design. As I walked down the hallway of her house on my recent visit, I couldn't help but notice the throw over the end of a bed in one of the bedrooms. Yep! It was my friend's finished throw...I just had to take a photo... it is so beautiful! 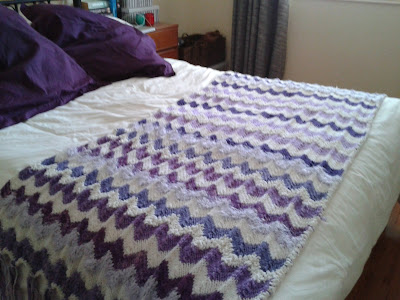 My friend and her husband have just come back from a 3 month caravanning holiday to South and Central Australia. While they were away, my friend 'skyped' me one evening as she wanted to show me the knitting project she was working on while they were away. She said that a project that I had  worked on last year while both couples stayed in Brunswick Heads had been her inspiration! It was about 45 cm long at that stage but I was to see the finished project on this recent visit, also draped on one of the beds...
This was my throw... just garter stitch with lots of interesting yarns... 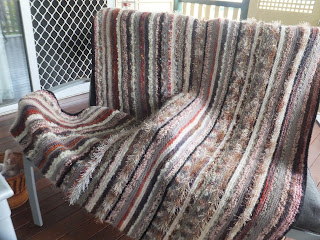 So on this recent visit, my friend wanted to show me this finished throw that she had knitted while travelling...
Doesn't it look effective? I love it! 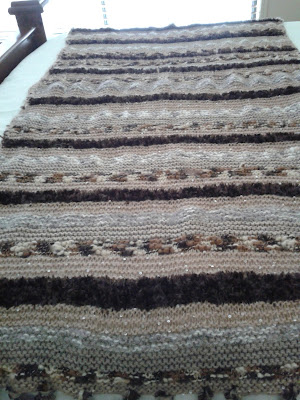 And a close-up; it's finer than mine being knitted on smaller needles and mainly 8 ply. 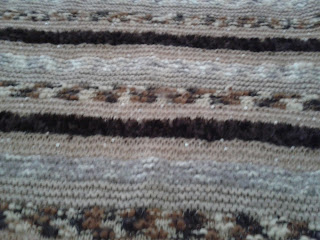 And here is the chevron pattern which is made up of just 2 rows. (My banner has a knitted chevron )
Narrow chevron stripes
This is a good way to use up oddments
of yarn,
working one garter-stitch ridge in
each colour. lf you want to use that colour
again within about 6-8 rows, carry it up
the side of the work; otherwise break it off
and weave in the ends. The WS of the
fabric is an attractive mass of broken
stripes. (as you know I do thick stripes and thin stripes not just  2 rows all the time)

Email ThisBlogThis!Share to TwitterShare to FacebookShare to Pinterest
Labels: knitting

Beautiful throws. One day I will get around to using all my wool. Hugs....

Maria
so very kind of you to share you special pattern - well its special because it is just so "you". I msut give it a try - and imitate you...

What lovely throws your friend has knitted..
As I not a knitter sadly I will not to making the throw..

Lovely throws Maria. Your design is so 'you'.