Once again I’m joining Janine from the Rainbow Hare blog here, in posting about yarn related activities in the last month. Janine has been working on a sweater but also writes about the building project in her garden. I’ve managed to work on a number of projects during the last month which probably explains the dust that has appeared on wooden furniture...and other housework neglect.
I was determined to finish a rainbow throw that I was making for DsD3 and I did.

She is so busy with her work that finding a good time to hand it over became problematic so the handover happened when she dropped in to a Trivia night that DH and I attend, on her way home from work. She needed a ‘joy boost’ and I like to think my efforts helped with that.
In the last month I got to work on my usual contribution to our parish art and craft show...you guessed it...a knitted throw!
Here’s the progress so far with just over 2 weeks to go until the show...all good for a finish on time.

At Knit and Natters and Trivia Nights I’ve been crocheting squares...15 to be exact as that’s the number  of squares needed to add to the 15 squares made by Susan W, from Sunday Stitchers.

Susan also gave me 2 balls of this variegated yarn and I used these 2 with gold/yellow and red yarns. The colours in the variegated yarn look a bit like the indigenous colours but it’s actually a navy or ink blue not black. ( it’s the colours of the Adelaide Crows footy team) . I think a needy indigenous person will love the blanket that Susan’s and my squares will make. 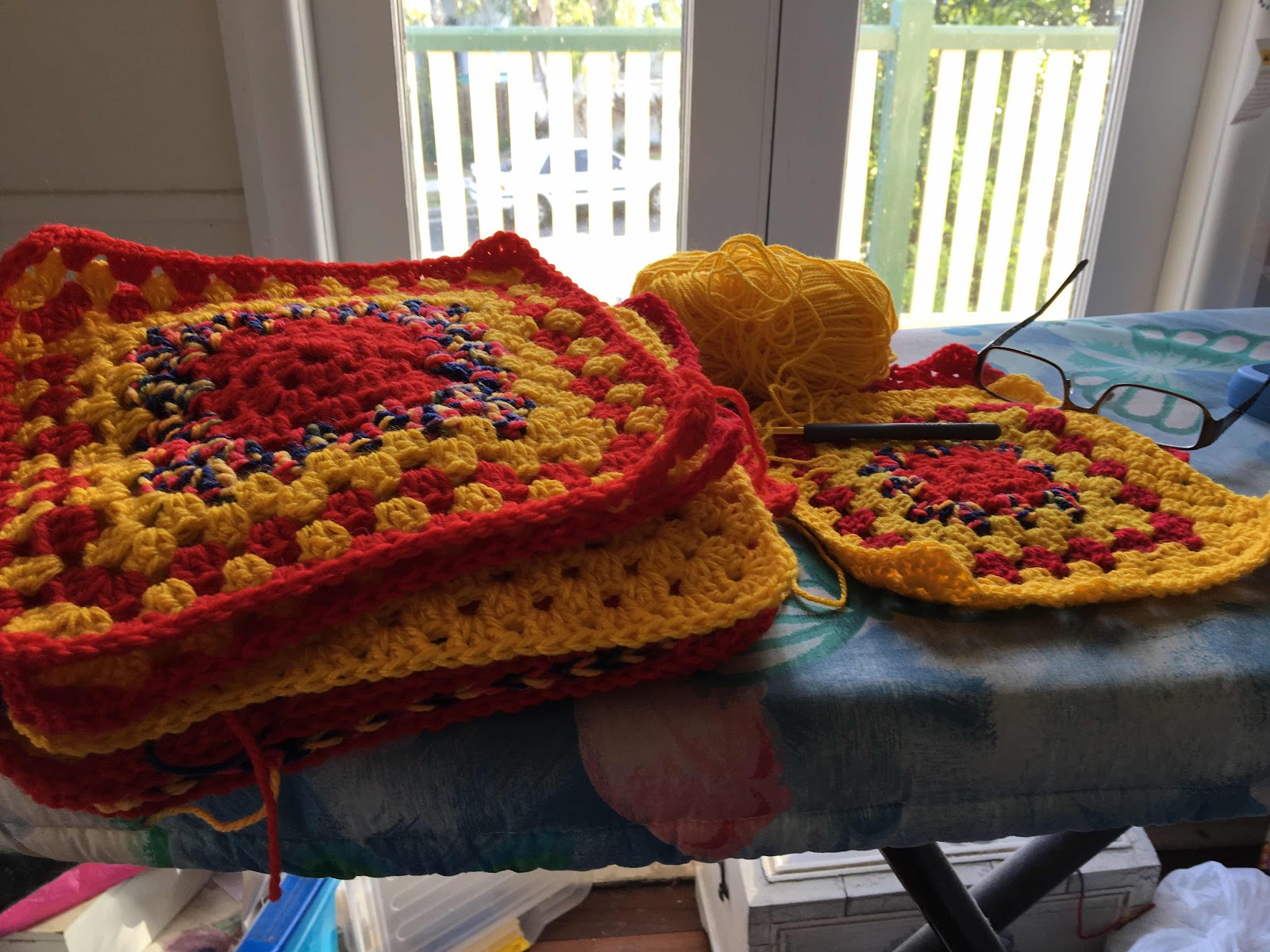 These squares plus the bundle I wrote about last month have still got to be joined but it’s comforting to know that that will be done quite quickly when the knitted throw is finished.
Years ago ( probably the 1980?) I knitted some kite shapes from a pattern published in a booklet in the Australian Women’s Weekly. The shapes came out very small so I experimented and made them larger. It was an on off project for years and I trialled various ways of sewing them together; eventually crocheting around each shape in black and then sewing them together.
This photo has to have been taken before I had my cataract operations in 2009 but I suspect it’s possibly 5 years before that.

I gave the blanket to a friend’s young daughter who had lost a finger in an accident...it was a perfect gift as E loved it. ( she’s just recently had her 21st birthday)
After I gave that blanket away I started making another lot of shapes; every ball of 8 ply that I’d buy, I’d make one shape. Then for whatever reason, I put the project away. And came across it a few years ago.
But I couldn’t find the pattern and for some reason I struggled to work out the pattern from the pile of shapes...very disappointed with myself! 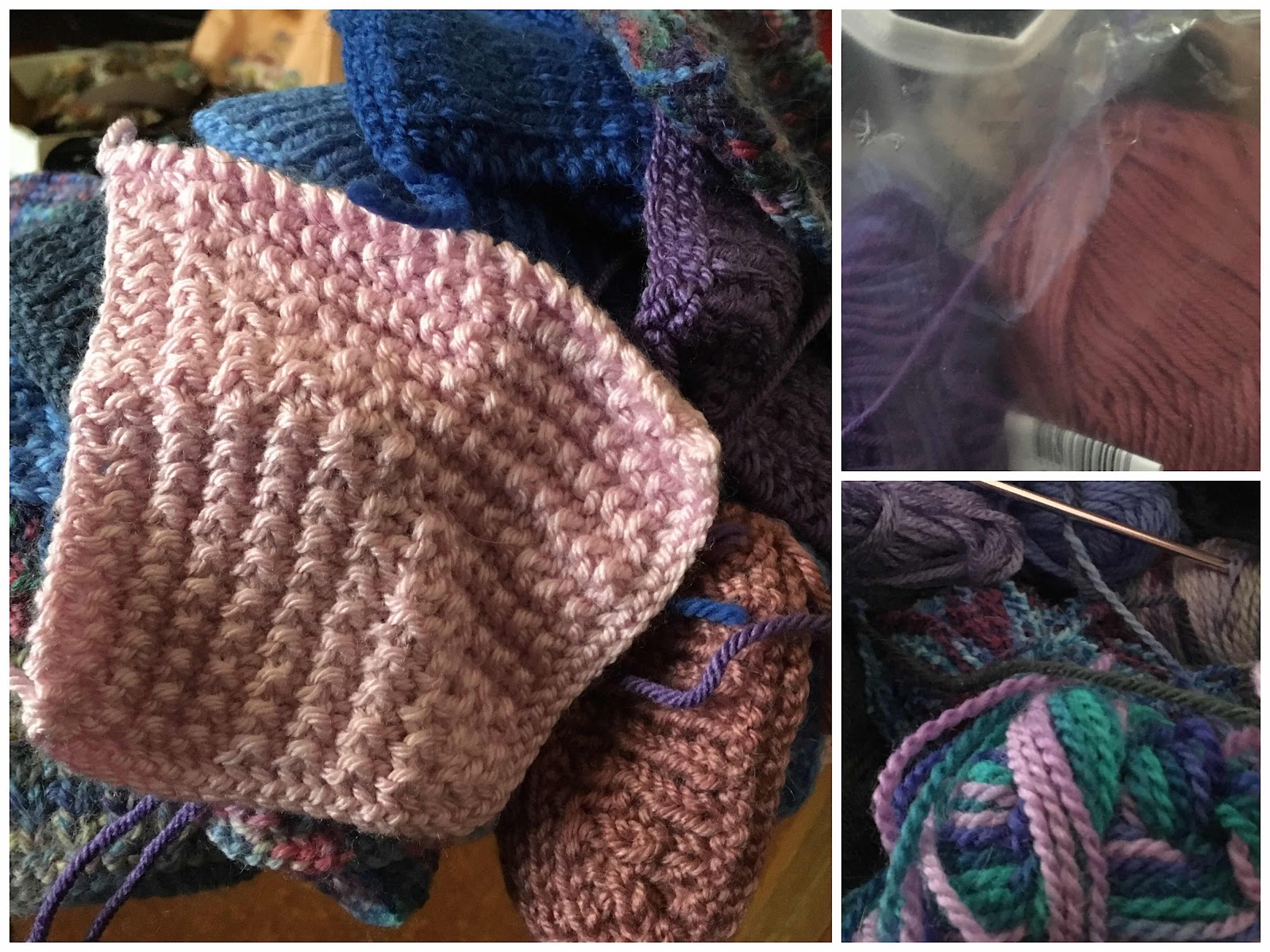 And then last week on the K4BN Facebook page someone posted a photo of a throw made with those same shapes in that rib pattern. A few people commented on the photo and I wrote that I’d lost the pattern. Within half an hour I had a copy of the page of that booklet from another member of the group. I was so happy and grateful that someone had kept a pattern published in 1972!!

I hope it doesn’t breach copyright rules to share it here ©?

Hi Maria, It's been lovely reading your post. Your work is gorgeous - the rainbow throw so beautiful, and the squares project is going really well. I love how that pattern was found too.

I remember knitting a bunch of those kite shapes way back when. They must have been donated to someone who was sewing them together, because I don't remember ever seeing them assembled, just remember making them. I think it was on the daily train trip to work at my first job, so would have been about 3 years after that pattern was published.

You are making great progress and the colors are great. I love the story of the pattern as well.
Amalia
xo

Isn't the blogging world wonderful, to find the pattern much needed is a real bonus. Love all of your projects.

Beautiful rainbow 🌈 blanket you made for your DsD3 . Also the one you donated to the church .
The squares Susan and you made will be another great blanket.
So good you managed to get the kite pattern...

So many lovely projects! You have a penchant for bright colors like I do. Really awesome that someone was able to provide you with the pattern!

I started a blanket with those leaves. You pick yo stitches and keep adding on
It got heavy and I left it to rest a bit
It’s still waiting.
One day I’ll finish it lol
Right now I’m making butterfly squares to make two blankets for the girls
But I’m so busy with hubby that I’m not making much progress if I get one square done a day I think it’s a good day
Your blankets always look amazing

I just bet the rainbow blanket cheered her up.

Shhh, don't tell anyone but I inherited my moms knitting patterns when she passed and some of them are from the 60's. I just can't seem to part with them.

Have fun making your shapes for a lovely new blanket.